The “Koalition Freies Wissen” is a coalition of Bündnis Freie Bildung, Digitale Gesellschaft e.V., Freifunk, Free Software Foundation Europe, Open Knowledge Foundation Deutschland and Wikimedia Deutschland. Together, they have been asking political parties that participate in the elections about current matters regarding Free Software, Open Data, Free Knowledge, digital education, access to and fundamental rights in the digital hemisphere. Responds have been given by

Out of these responds, here a short overview about their political preferences: (own translation and compilation based on the press release)

The answers given by the two parties currently in power – CDU and SPD – are unsatisfying. Both present themselves disproportionately pro surveillance. And both of them have a backlog regarding Free Software. The CDU even seem to be afraid of using Free Software. The CDU also sees no problem in breaking net neutrality by offering special data transfer agreements to those companies who pay more. Regarding the questions about public domain and publishing in Open Access, the CDU sees the only responsibility and possibilities in the hand of the original author – even if they are paid with public money. While the SPD at least sees the need to freely license the results of publicly funded science. Finally, the CDU is the only political party in Berlin that sees no need for a transparency law, while the SPD does at least a lip service here. 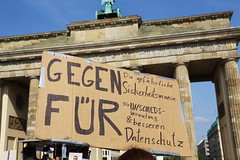 The current opposition – Grüne, Linke and Piraten – are much more open to Internet policy issues, still with some differences between them. First, all of them have a critical position towards surveillance, especially towards overflowing mass surveillance. Talking about Free Software, the Piraten missed to answer properly while the Grüne and Linke are very much in favor of an increased use of Free Software in public administration. The Grüne even like to stipulate that publicly financed software shall be published as Free Software. All parties of the current opposition are against zero-rating and pro net neutrality and they support the establishment of a transparency law as we have seen it recently in Hamburg. Talking about Public Domain and Open Access, Grüne, Linke and Piraten are in favor of publishing publicly funded content and results under free licenses with some very concrete proposals how to achieve this by the Linke and the Grüne.

After all, the Koalition Freies Wissen was happy to see that basically all political parties nowadays see the potential and importance of Open Educational Resources – although they differ in concrete goals and methods, with the most concrete proposals by the Grünen.

In sum: If you like your Internet and knowledge to be free, then do not vote for the ruling parties but choose one of the opposing parties – Grüne, Linke or Piraten.
And, if you are in favor of the opposition, please do vote! As Berlin is not just a city but also one of the 16 German federal states, this Abgeordnetenhaus is also a state parliament. Its competences, powers and budget allocations are much higher than the ones of a “usual city council”. In addition, Berlin is the capital of the Federal Republic of Germany. That means that local politics and policies in and for Berlin have some influence on the rest of the republic.