tl;dr: the The European Union runs a public survey about which Free Software program should receive a financed security audit. Take part!

2014, in reaction to the so-called “heartbleed” bug in OpenSSL, the Parliamentarians Max Andersson and Julia Reda initiated the pilot project “Governance and quality of software code – Auditing of free and open source software”. Which is now managed and realised by the European Commission’s Directorate General of Informatics (DIGIT) as the „Free and Open Source Software Auditing“ (EU-FOSSA) project. FOSSA is aiming at improving the security of those Free Software programs that are in use by the European Commission and the Parliament. To achieve this goal, the FOSSA project has three parts:

END_OF_DOCUMENT_TOKEN_TO_BE_REPLACED

Read More →
Recently, the EU ministers responsible for research and innovation decided unanimously that by 2020, all results and scientific publications of publicly and publicly-private funded research must be freely available. This shall be ensured by the mandatory use of Open Access licenses that guarantee free access to publications. In addition “the data must be made accessible, unless there are well-founded reasons for not doing so, for example intellectual property rights or security or privacy issues”.

This important decision is long overdue and a good step towards opening up scientific results. And to give back to the public what they indirectly paid before with their tax money. However, this EU minister’s decision misses the opportunity to declare and understand software as a part of the research. Means to also include the free availability of the software used for publicly funded research. Indeed, there is not a single word in the press release to cover any informatics, software, “computer aided research” or anything alike. Everything that the ministers seem to care about is the final paper that is published as an article.

But we are in year 2016 and it is time to understand that software is information and knowledge – just as any article is.

Software is an integral part of nearly all modern research. Beginning from metering, calculations, demonstrations to following stages of statistics, writings, publications … nearly all steps involved in a research project are in need and covered by the use of software.

What does it help the information society if a scientific paper is published in Open Access but all the steps involved towards creating this publication are built by investments in intransparent, closed and proprietary software solutions and data formats? Especially as the creation of a paper often involves many years of investigation and millions of Euros of fundings.

What does it help the science community, if the software that was used to achieve a result is not transparent? Software is really not without fail: miscalculated prison sentences, hardware scanners that randomly alter written numbers or professional software abuse to cheat on emissions by car manufacturers … – How can a researcher really believe in any result of a software that no one is able to look into and prove it to work correctly?

If the EU ministers responsible for research and innovation really aim at opening up scientific knowledge but keep software out of their scope, they do a very selective choice and only open up the very final stage of any research process. Articles are only able to list outcomes and results of a research process. Not including the software to be freely accessible means no one can see, reproduce or test the process itself or the mathematical methods that have been used to achieve these results.

Most researchers would love to have the software free as well

The EU ministers decision also seems not to be in line with what a majority in the scientific world is waiting for. Because having the software and data that is used for research freely accessible is definitely in interest of many researchers.

As an example, at the end of 2015, I was lucky to have been invited to shape the outcome of the JPI Climate symposium “Designing Comprehensive Open Knowledge Policies to Face Climate Change”. JPI Climate is a collaboration between 17 European countries to coordinate jointly their climate research and fund new transnational research initiatives. Given this transnational, European background, JPI Climate was setting up common Open Knowledge Policies. These shall help to find sustainable ways of archiving and ease the exchange of data and results – which in turn shall boost innovation in climate research. Naturally, JPI Climate was calling their members to publish under Open Access. But in contrast to the EU ministers, the JPI Climate does understand that all the way of the research process until the publication of the final article is just as important as the publication itself:

the symposium’s results confirm that access and availability issues are just one issue within the “openness” approach of “Open Knowledge”/“Open Science”; therefore, comprehensive policies (i.e. tackling the whole research cycle) should encompass measures related to “reuse and re-distribution” of data, information and knowledge and “universal participation” when designing, creating, disseminating and evaluating such data, information and knowledge.

Hence, participants on the common symposium agreed that

6. Open software/formats (independent from vendors) should be mandatory for data repositories and Data Management Plans (DMPs). Research Funding Organisations should take the lead and foster changes of business models when dealing with data

In addition to research results and data, open source software (used in the research process) should be mandatory and published under a free license.

Obviously, the science community is large steps further than the EU ministers responsible for research and innovation. Many researchers all over Europe already seek for the mandatory use of Free Software in research process and the publication of software whose development was publicly funded. If EU ministers really like to realize their now proclaimed vision that “knowledge should be freely shared”, they should listen to their community and keep to their advise.

It is time to understand that software itself is knowledge and an integral part to create more (scientific) knowledge. And it is time for the European Union to note: There is no Open Science without the use of open standards and Free Software!

Today is the day to show your love for Free Software. Here is my message:

I love Free Software because it is in the very heart of a 21st century society that respects the rules of privacy, autonomy, democracy, participation and the freedom of speech.

(Just to list a few of its countless good characteristics)

I would love to see this message going out to the people that decide on our daily lives, our legal and educational framework. By promoting and using Free Software, they have the chance to set up the roots for a truly interconnected and transnational society. Hence, my message today is addressed to all of you in the European Parliament: 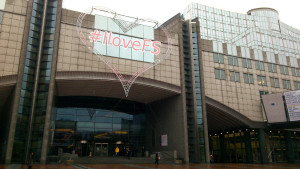